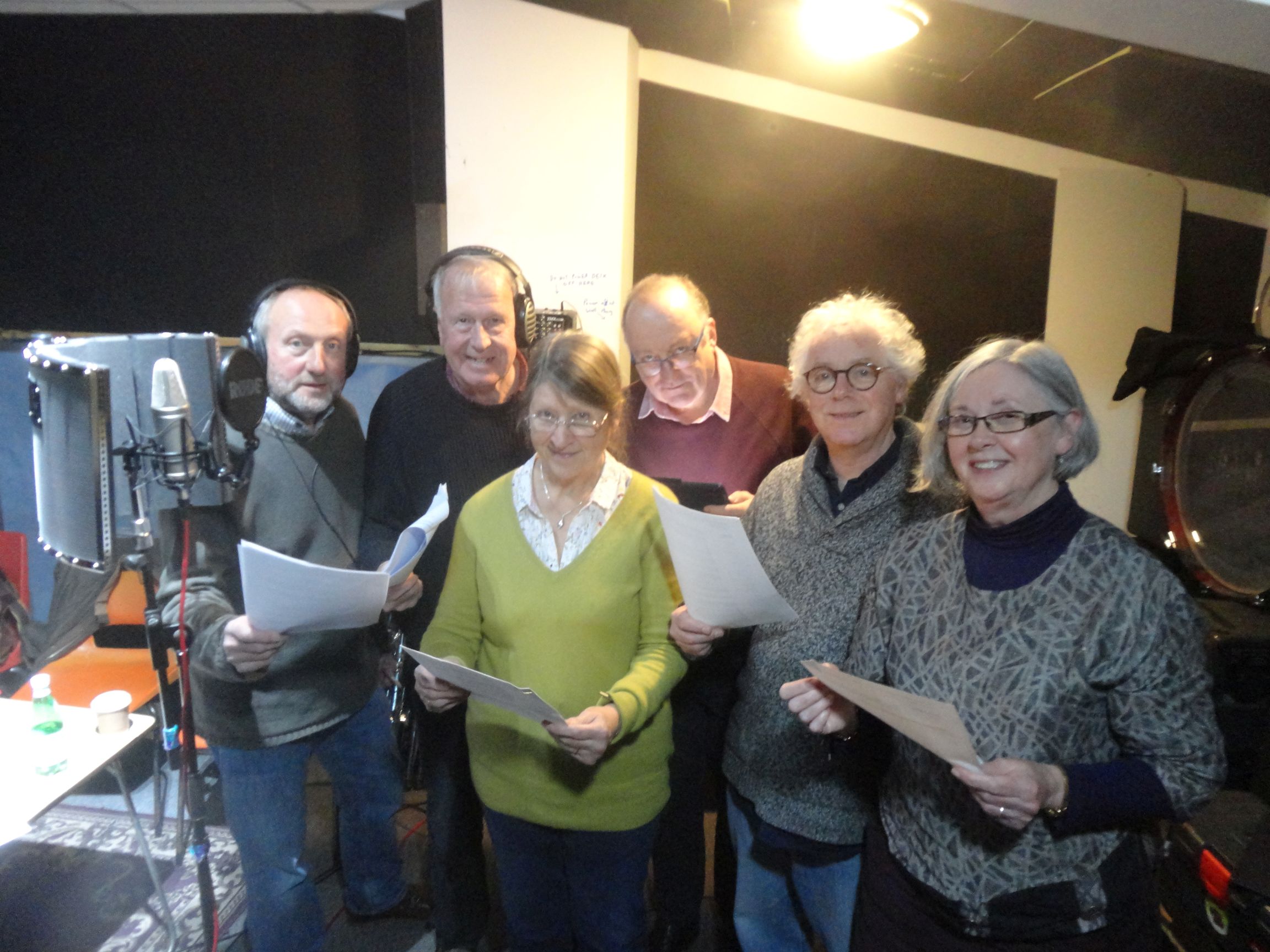 Team Blackhaven has lately re-assembled, like the superheroes we are, in what we are now calling the “shedsorrystudio” here in Cromarty, to record a new series of Blackhaven nonsense, entitled “The Radio Blackhaven News and Chat Show.”

It’s a slight departure from our murderous Blackhaven narratives – though we hope to produce more of those too in due course.  I’m not saying there won’t be horrible murders in any episode of Radio Blackhaven – but it’s more about the bonkers characters, the banter, and the little dramas of life in that very strange Highland village.

Anyway, we are happy to say that all our new equipment actually worked, nothing caught fire, and we  managed to get three episodes in the can by the end of our scheduled time.  So now that we have proved we can do the show right here and using our own kit, we might carry on and keep doing it.  After all it keeps us off the streets.

The first three episodes feature Seymour Strangely as the radio host, assisted by Doris Macallan, and hindered by Tufty MacNicol.  Popping in and out of the Radio Blackhaven shedsorrystudio in the first series are Brigitta Bovril, The Reverend Leviticus, Inspector Macyard, Fergus Lamentable, Dr Leckie, Shona MacBride, Auld Foggerty and the Womens Institute.  There will be Jamgate.

All we have to do now is edit it, add in the FX and so on, and publish it for your tender ears. So, watch the skies, dear listener.  You have been warned.

Blackhaven Series One, Episode Three (103):  “This Might Sting a Little”

Tufty undergoes some rigorous therapy at her hands. We meet Charlotte the librarian in her lair, and Macyard interviews the Rogue brothers.  But will the unwelcome visitor’s murderer be brought to book?  Episode three will be released at the end of November. You’ll have to wait until then to find out…

What I can reveal is that I have just spent two days in a shed with the engineers creating some fairly ludicrous FX for this.  Listen out for the terrifying scene in Dr Leckie’s office, and the Rogue brothers’ unique approach to fixing that recalcitrant copper piping.  And we spent a hilarious half hour researching clown “parping” noises. I’m telling you, there’s some very odd stuff out there on youtube. If making this stuff up is not a proper job, Mum, I don’t know what you expected.

Blackhaven Series One Episode Two (102):  “On not being Undead”

Having failed to learn never to try this again, we returned to the studio yesterday to record episodes 2 and 3 of the podcast.  It was all going well, until someone backed a huge lorry into Johnny the Boffin’s car, squishing bits of it to a tin smear against the wall of the Music Shed.  Fortunately no-one was injured, but the car’s probably a write-off, and Johnny’s not best pleased, as you can imagine.

Nevertheless The Show Must Go On.  So despite a fleet of lorry-drivers outside, conspiring to offload their goods in as noisy a fashion as possible intermittently throughout the day,  we did get the actors’ lines for the whole of eps 2 and 3 in the can, and even finished earlier than expected.  Maybe we are getting the hang of this…

Episode two features the over-zealous shopkeeper Fergus Lamentable, the furious old Nazi Auld Foggerty, and the hypochondriacal Dr Leckie – as well as some of the characters from ep one.  We are trying to introduce the audience to Blackhaven, one or two nutcases at a time…  Besides, there’s only so much you can cram into each episode.

We did also manage to take a few mug-shots of the Usual Suspects, and the less offensive of these will be finding their way on to the website sooner or later.

For example, here’s Dave and Johnny the engineers, pretending to do some work. 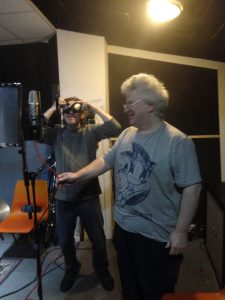 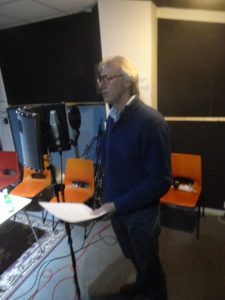 Blackhaven Series One Episode One (101): “It’s not over till the hairy man sings”

Well, we finally made it to studio with episode one of the Blackhaven podcast!  The guys at The Music Shed, Inverness were up for the fun and happy to be involved.  Dave and John, the sound engineers, are straight out of Central Casting, with that slightly mad, febrile look that signifies the musician/technician in their lair.  And hilariously, the studio itself is basically nailed to the outside of a funeral parlour and adjacent to an old cemetery.  I mean, you cannot make this stuff up!  Though actually, that is exactly the sort of thing Blackhaven is all about.  So we felt very  much at home.

I think they had never had so many people crammed into the studio before.  But we somehow squeezed in, and delivered our respective profundities into the mikes on cue.  And Marjorie and Jon added some suitably execrable mandolin and fiddle to the Tufty and the Hootenany Teuchters “tuning up” track. That was fun.  Have to say, my favourite moment was when someone on mike asked a question to the editing booth, and I was able to answer deadpan, mimicking the classic “Toast” trope: “This is Clem Fandango.  Can you hear me?”  Always wanted to do that.

After we had the actors’ lines in the can, we spent some time working on the Outro, which is using a squeezebox instrumental track from the Blackhaven song (“There are Monsters everywhere”) and cross-fading into the organ plus vocal for the last verse and chorus after the credits finish.

Fair to say, we enjoyed ourselves, and we hope this will be only the start of our recording adventures.

Then the actors were able to pop off home, while the heavy lifting got underway.  Turns out it takes at least three times as long to add the FX, music, and sound environment as it does to record the actual dialogue.  And it ain’t easy stuff.  You live and learn.  I’ve never seen so many tracks on a project.  Actually, neither had John and Dave, and they’ve been in that studio for about thirteen years.  (Rumour has it, they haven’t seen the outside world since the Beatles broke up.)

Next day, more editing etc.  Finally, and only about three hours later than we planned, the guys had everything lined up and ready to be Mastered.  And yes, that’s another skilled job.  So I left them to it.  If all goes well the finished product should be ready for podcasting well in time for our scheduled launch day, which inevitably will be – Halloween…